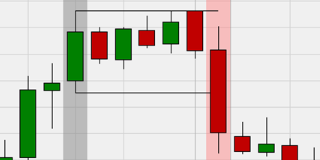 Here we have an article from the series "Chartformations". So-called "chart formations" occur in all markets and on all time levels and should belong to the toolbox of every trader. Today we present the two best-known chart patterns that indicate a trend reversal: the shoulder-head-shoulder and double top and double bottom formation.

If one only knew tomorrow's prices, everything would be very simple: enter the order, wait and see and finally reap the price gain. But as we all know, the right-hand section of a chart is always unknown and no one can predict the future - not even the best trader or analyst. Certain probabilities, however, can be derived. For this reason, millions of traders plunge into the market and try to create possible scenarios for the future using a wide variety of tools. In technical analysis, for example, trend lines or support and resistance ranges are used as tools for price forecasting.

A further possibility to analyze the markets are so-called "chart formations" - i.e. price patterns that can occur again and again in different markets. As we have learned in the previous articles, the entire Technical Analysis is based on the premise that certain things repeat themselves. The reason for this is human behavior, which is more or less constant in certain market phases and thus leaves recurring patterns in the chart. In short, the key to understanding the future lies in analyzing the past.

Orderflow trading is only possible with futures. Download a futures trading demo here.

An important question that every trader asks himself when analysing the price trend is: Is the trend continuing or will a trend reversal soon follow? Reverse formations can do a good job here. They signal an early reversal of the existing trend and thus enable attractive trading signals. 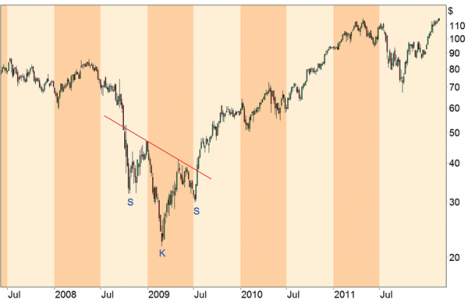 Image 1: After reaching the high of about 86 dollars on May 17, 2008, the share price fell massively under the wheels. The free fall did not end until October 19, 2008 and a strong upward movement from around 32 to 47 dollars followed. Between January and the end of February 2009, the share fell to a new low of around 22 dollars. This was followed by another rally until the beginning of May 2009, when the share turned south again at 41 dollars. In July 2009, the bulls managed to pull the Caterpillar share back up to 31 dollars - a first indication of a possible turnaround. The break of the neck line occurred at around 38 dollars, so that the SKS formation was completed in an exemplary manner.

The best-known representative among the reversal formations is the so-called "shoulder-head-shoulder formation", in short: SKS formation. It is both easy to recognize and reliable. The name is based on the obvious similarity with a head between two shoulders. The left shoulder marks the first low (S), the second low (K) forms the head of the formation. Thus, by definition, there is a clear downward trend. The third, higher low (S) forms the right shoulder of the chart formation, indicating that the prevailing trend is weakening and a trend reversal may be imminent. At this point, the so-called "neckline" can be drawn. It connects the high points between head and shoulders and serves as a signal generator. The trend reversal is only confirmed when the neck line is breached by the closing price. This break is to be seen as a buy signal. The long position should be hedged with a stop slightly below the right shoulder. Which price target can be derived from this formation? To do this, the distance between the head and the neck line must first be calculated. This price distance is then placed on the breakout point and thus results in the minimum price target for the trader. Figure 1 shows the daily chart of the Caterpillar share with an inverse SKS formation.

In addition to the SKS formation, the M and W formations are also among the best-known trend reversal patterns. The M formation signals a trend reversal from a rising to a falling market (double top), while the W formations signal a trend reversal from a falling to a rising market (double bottom). To show how these formations are formed in practice, let's take a closer look at the W formation. The price of any security is in a downward trend and forms a striking low. From this level it then runs in the opposite direction for some time, i.e. upwards, until it reaches a striking high and then turns downwards again. It comes to another low, the second bottom. This is generated relatively close to the level of the first low. If you now connect these two lows with each other, you get the bottom, which should not be undercut any more. If the course bounces off here again and then runs upwards, the first part of the formation is complete. At this point, the horizontal signal line is drawn at the height of the previously described high point. Only when the price breaks this level, a buy-signal is triggered. The M-formation is nothing more than the reverse version of the W-formation, so that a description is omitted. The following BASF share price trend is intended to serve as a practical example (Fig. 2). The weekly chart shows both a W and an M formation. As with all other formations, the same applies here: Only the sustained break of the signal line can be regarded as a trend reversal and at the same time as an entry signal. The stop when trading a W-formation can be placed just below the last low, in an M-formation slightly above the last high. 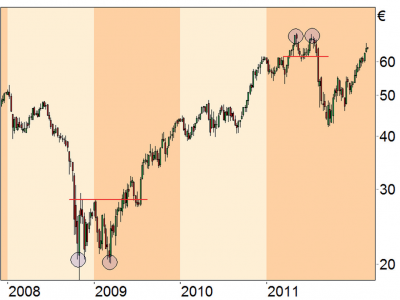 Image 2: After the steep fall of BASF shares between the end of 2008 and spring 2009, a double or triple floor was formed, which was confirmed by the eruption across the red signal line. This was followed by a strong upward trend, which lifted the share price to around EUR 70. A double high developed in this range, which was confirmed with the break of the signal line.

Chart patterns belong to the basic equipment of a trader

The formations presented here represent only a small part of all known chart patterns. With a little practice, they can become an important tool for any trader, because tracking down certain price formations has many advantages in trading:

Of course, this also applies here: No pattern is perfect and absolutely accurate. If this were the case, they would no longer exist after a certain time. In combination with other techniques presented in the other articles, formation analysis provides real added value in trading.