Trading with the Supertrend 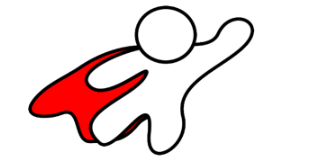 If you don't have a plan on the stock market, you're playing for luck. I don't know about you, but I don't want to rely on my luck alone, so I need a plan, a strategy.

If you deal with automated or semi-automated trading, one thing becomes clear relatively quickly: it is impossible to grasp the market in all its complexity with just one approach. The market is simply too versatile for that. Upward trends constantly alternate with downward trends and sideways movements, which have very different dynamics and reach different distances. It is a waste of time and effort to try to counter this complexity with just one indicator or a single mix of indicators that generates successful signals in all market phases. But there is a simple trick. Instead of looking for one formula, we use a variety of approaches, each of which earns more money in its good phases than it loses in its bad phases. In this way, a stable performance curve can be generated across all strategies despite adverse circumstances.

With this thought I started today's contribution for the CFD Report. I wanted to present a tactic that does not claim to be perfect, but has a certain advantage at least in some market phases, but where do we start? The best thing is to make a few basic distinctions that we think make sense. For example, in the stock market, the tactic should be on a daily basis, the playground of many private traders. And what trend do we want to examine? Again, I didn't have to think long and decided to go for the long side. This was for two reasons. On the one hand, there is the suspicion that stocks are more likely to show an upward trend than a downward trend in the long term. Of course there are also shares that "go bust", but in the masses the long side simply seems more interesting. In addition, an important practical point comes into play: not every stock can be traded on the short side. Both the choice of CFDs and other derivative short products is limited. On the long side, on the other hand, we can spread our capital widely.

Try the Supertrend on the award-winning NanoTrader platform.

This set the basic conditions and the next step was to develop concrete entry and exit signals. For this purpose, I used the super trend indicator for no particular reason. This indicator is one of the trend followers, whereby the volatility in the market is taken into account (for further explanations of the super trend, please click here).

If a stock is in an upward movement, a countermovement, measured in multiples of the current Average True Range, to be determined by the trader, is required to end the buying wave. I wanted to use the Supertrend indicator not only as a trend filter, but also as a signal generator - KISS. If there is a bullish trend change in this indicator, buying takes place directly at the closing price (in practice shortly before).

Picture 1 shows the indicator with some marked entry signals, but what can we make of them? 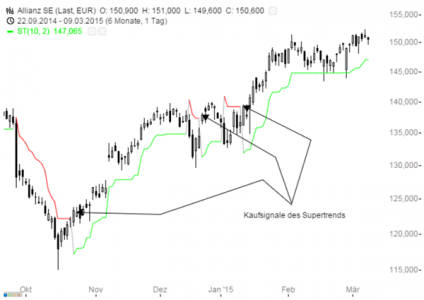 Scrolling through various charts, we will find some movements that were highly dynamic after the entry. Take a look at the recent signal in Merck KGaA shares, for example. Since the buy signal of December 22nd at EUR 79.64, the stock has already risen by a good 24%, and this unlevered (see Pic.2). 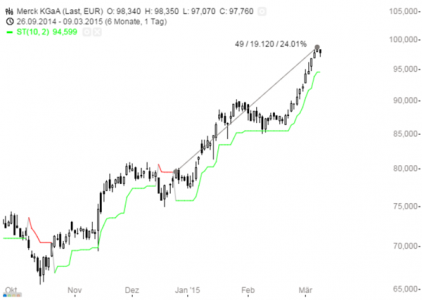 The problem with such visual observation, however, is that we like to see only what we want to see. The good signals immediately catch the eye, while the bad ones are often ignored.

There's only one thing that helps: we send our signal through the computer, or rather through all 30 DAX stocks since 2000. I'm mainly interested in the fundamental power that our buy signal brings with it. To measure this, I have defined a price target and a stoploss in percent and have had various combinations compete against each other. In addition, with the volatility factor within the super trend, we have a further adjustment possibility, which I immediately took a close look at. The result is an optimization run with almost 5,000 possible combinations between price targets, stops and settings of the ATR factor.

Out of the hodgepodge of results I would like to present you some interesting combinations. Let's start with an approach that will probably interest many traders. It is an active system. If we use a super trend with a length of 10 periods and a factor of 2.1 for all DAX stocks, whereby we speculate on a 5% price gain after the buy signal, while we are also prepared to accept 5% losses (stoploss), then we can close approx. 67% of all 3,576 trades at a profit. Figure 3 shows the corresponding performance curve before costs over all trades, if we would buy shares for 1,500 Euro each.

But not everyone wants to act actively, but has nothing against boredom because they hold their positions longer. For these we can fall back on the following attitudes, for example: With a period for the super trend of 10, a factor of 2.9 and a profit target at 15%, while the stop is 10% below the entry price, we can close about 70% of all trades in profit and generate the performance curve from figure 4 (also before costs). The number of trades is now only 1,424. 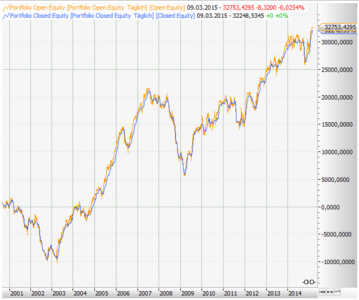 But there should be traders/investors who only want the best. Based on the test period, the maximum performance of 56,000 euros before costs was achieved with a period length of 10 and a factor of 0.5 for the super trend, if we placed our stop 20% below the entry price, while we were aiming for a price target of 16%. For this profit before costs we would have had to enter 2,066 trades (see Pic. 5). 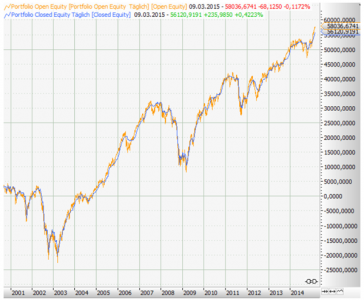 Voila, ready are three profitable tactics. But does it make sense to act on them blind? Of course I can't take your decision, but I find it difficult to stubbornly trade for one of these three approaches. With the active approach it quickly becomes clear why. If I assume a cost of only 5 Euros for each trade, the strategy ends up in the red. With the other two tactics these costs could still be absorbed. Here we could also expect 10 Euros per trade, but I'm not really carried away by the performance, especially not in relation to the risk taken. The account collapses during the bear markets are quite big. Exactly here would be an approach for further optimization. Perhaps a trend filter could be used to improve performance a bit more. In all three cases, on the other hand, the hit rate above the 50% mark is tempting, since we all like to get it right quite often.

In trading, we all want just one thing: to win. Since traders are reluctant to play roulette, they resort to strategies and we have turned to one of them today. With the help of the Supertrend Indicator we have defined a simple entry logic and analysed it with various price targets and stops. In doing so, we were able to identify a number of profitable combinations before costs, which however do not perform well enough for systematic trading. You are probably coming to the same conclusion as I have. Doesn't this make the whole article useless? Not at all, because we can continue to use the results we have found. Apart from further optimization steps, I find the following procedure in particular relatively exciting. First of all, the fundamental state of the market is determined within the framework of a classic analysis. Here you can fall back on all analysis tools you know and already use. If you find that a bull market is present, you could take the second step and use the super trend to find suitable signals. With the test results found behind us, we have a certain statistical background and ideas of what to expect. The strategy provides and quasi a basic advantage, which we can expand further by gathering our own experience in dealing with the signals. Instead of applying logic systematically, we combine it with discretionary decisions.