Build it with Renko 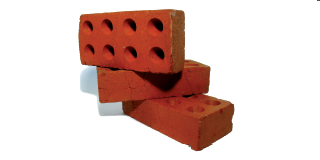 Renko charts have been used in Japan for more than a hundred years. It is not known exactly how they were created. A renko chart consists of many price blocks. These blocks are designated with the Japanese word "Renga" for brick. It is assumed that the term "Renko" comes from the Japanese "Renga".

The construction of the Renko charts

Renko charts are created according to very specific principles. They consist of a sequence of black and white price blocks, which are all set to the same value (so-called "brick size"). As with candlestick charts, the color white stands for periods of rising prices and black conversely for falling prices.

Renko charts only take the price movement itself into account in their presentation. The factors of time and volume fall by the wayside in this chart as well as in kagi and point&figure (P&F) charts. A Renko chart is constructed in such a way that each new brick that is added is placed slightly "offset" and thus has its own column. There is no stacking of blocks on top of each other - similar to the "X" and "O" columns in P&F charts - in the Renko chart.

However, a common feature of the charts is that even in the renko chart, something only happens and a change occurs when a certain price rise or fall has occurred. For example, a new white box is added as soon as the high of the last building block on a closing price basis is exceeded by the predefined value. A black brick is drawn as soon as the corresponding low of the last brick is undercut by the "brick size", also on a closing price basis.

This method basically has the effect of suppressing the so-called "price noise", i.e. the fact that prices remain within certain narrow ranges over certain periods of time, in the chart. Thus the eye of the observer is automatically directed to the essential - to existing trends and their direction.

The following example is intended to illustrate the construction and the effect of a Renko chart in comparison to a candle chart. In this example, the initially mentioned amount for the brick size is set at five euros for the Allianz share. This means that each of the price blocks in the renko chart shown has a price range of five euros. The advantage of this method of choosing a fixed amount is that it is easy to understand and it is also easy to calculate at what price a new brick will appear. 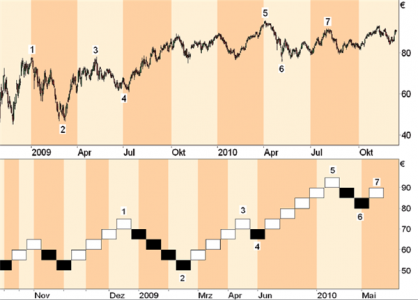 Picture 1 shows a two-part chart of the Allianz share over a period of about two years. A candlestick chart of the share (above) is compared with a renko chart (brick size five euros). The numbers make it easy to compare the corresponding points in the two charts.

Their disadvantage is that for underlyings with optically high prices, the fixed amounts must be adjusted accordingly. As a rule of thumb, it is advisable to take a value that corresponds to about one-twentieth of the highest price in the selected time period.

In the example chart, the Allianz share had a high of 96 euros at the beginning of April 2010 (point 5), so the chosen "brick size" of five euros corresponds approximately to this rule of thumb. The fact that the two charts cannot be superimposed on each other is a logical consequence of the fact that renko charts eliminate sideways movements in narrow price ranges and thus the renko chart appears "shortened" compared to the candle chart. However, the individual numbers should give you an idea of where the numbered chart points of the candlestick chart can be found in the renko chart.

Until the beginning of January 2009 (point 1), the sharp rise in the Allianz share price due to the year-end rally in 2008 created a series of four white bricks in a row. The price rose in the candle chart to 77.45 euros (closing price basis). The fourth and last brick in this row had a price range of 70 euros at the bottom and 75 euros at the top. The "overshooting" 2.45 Euro is not considered in the Renko chart.

A new, fifth brick would only have been included in the chart if the price had closed at 80 euros or higher. The market must therefore always close by the previously set minimum margin (in this case five euros) above the high of the last brick in order to be able to enter a further (white) brick. Back to the chart. At the beginning of January 2009, however, the share price began to fall by 77 euros, which in the following two months brought the price down to a low of 46.64 euros (point 2). A black brick is drawn when the market closes with the required minimum spread below the bottom of the last brick (here 70 Euro). A black block is then to be drawn in the next column to the right. On 15 January the share closed at 64.38 euros. This means that this criterion for a black block was met (70-5=65 euros). A few days later, on 20 January, the share reached the next critical point at 60 euros, so that the second black brick had to be entered (towards point 2).

A temporary recovery then set in. The subsequent downward movement occurred without any significant resistance from the bulls, so that further black tiles appeared (towards point 2). A rapid rise in the share price caused Allianz to close at 60.50 euros on 17 March. With this first white tile a real rally started without any significant corrections, so that three more white "bricks" had to be added (point 3).

It now took two months until the subsequent correction towards point 4 came to an end. As this correction resulted in closing prices below 65 Euros, a black brick had to be drawn (point 4). The subsequent rise lasted for nine months, interrupted by several months of sideways movement of the share between 80 and 90 euros. Throughout this period, the Renko bricks remained white so that an investor could continue to hold the shares (point 5). How the last three tiles in the chart example turn out should be clear from the description so far. 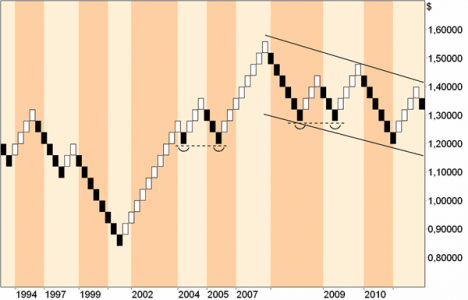 Picture 2 shows a long-term chart of the euro against the US dollar over a period of about 17 years. Thanks to its symmetrical chart display, the Renko technique allows the viewer to quickly recognize chart elements such as double bottoms and to draw trend lines and trend channels precisely.

The trading technique with Renko charts is very simple: you buy when a white "brick" appears and sell when a black brick appears. Thus, the methodology - as with other charts - is clearly trend following. Since the reversal points for new bricks are fixed and can be calculated from the outset, an investor can also use these price markers as stop prices for exits or (in the case of white bricks) for entering the market.

Of course, Renko charts can also be analysed from a chart technical point of view. The bricks of the same size give Renko-Charts a high degree of symmetry and balance and have the property of highlighting trend phases very nicely. Therefore Renko-Charts are also best suited for trend observation.

Renko charts compress the course of the chart to the essentials, as sideways phases are filtered out of the chart. This leaves the user with a view of the trend and the trend direction of the market. Since it filters out smaller highs and lows in the chart, it is an excellent aid for defining resistance and support zones as well as trend lines and trend channels (picture 2). Because they are easy to use, they provide the investor with clear buy and sell signals. However, they can also generate false signals in tendency-free market phases. In the fourth episode we will then turn to the three-line break charts.